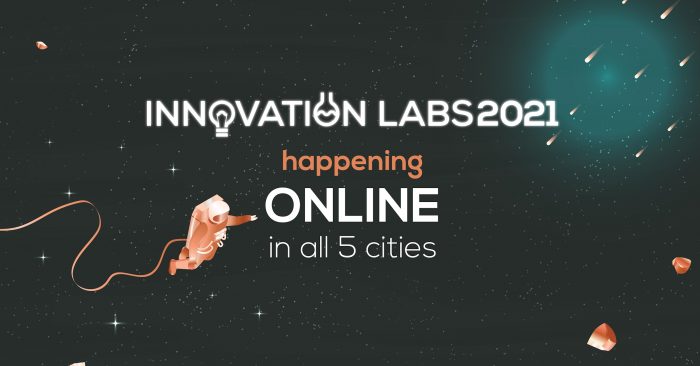 Innovation Labs is a nation wide program dedicated to innovation and entrpreneurship for universities and beyond. The 2021 edition of Innovation Labs at UBB (Babeș-Bolyai University) has been launched on 25th of February with an IdeaJam event, followed by  hackaton between 6-7 of March. The hackaton was organized at regional level,  with 28 teams pitching in front of a jury including highly appreciated entrepreneurs and It experts. 13 teams represented UBB in this hackaton, and 7 teams were selected to be included in the program that will help them develop their idea, by offering mentoring, workshops and continuous support for the next 6 months. We are proud of having collaborative teams, with students from other universities based in Cluj-Napoca.

We proudly present the UBB teams and their ideas!

Idea: create a mobile app that will be your „digital elbow in case you snore”’ the mobile app will pair with a smartwatch in order to detect apnea episodes. Our solution will solve a problem that affects the everyday life of milions of people.

Idea: Create a tool that can be used as assistent for data analysis by small companies and start-ups, that cannot afford to hire someone, but are in need for data science. The innovative aspect of my approach lies in automatically chosing the most suitaable ML algorithm for data analysis.

Idea: We designed an application for transportation companies, that will ease the work of dispatchers by computing optimal routes while efficiently managing trucks and drivers.

Idea: Imagine you want to find out about  black holes, and you are having a conversation with an expert, such as Stephen Hawking. Our aplication is a chatbot that will simulate the voice of a person, learning from his or her written speeches.

Idea: Our project is a minimal and efficient  browser extension against pishing attacks. These security attacks are more and more present and cause a significant amount of data breaches over the internet. In short, users will be notified in real time about the danger of the visited pages.

Idea: Our idea is virtual assistent that will organize your turist experience, taking advantage of best offers, visiting the most interesting locations, while managing the budget and time. Based on location recommendations, our application will propose an itinerary in real time and provide navigation throughout the route.

Idea: Mediq is a software that will contour cancerous tumors and risk organs, using ML algorithms, reducing the time needed for defining the radiotherapy plans for patient and providing increased precision and objectivity.

Idea: BOOKR is an application that facilitates the relation between service businesses and their clients. Customers can find on BOOKR platform all kind of services such as: beauty salons, dental clinics, physicians. The advantages of our approach reside in 24/7 management of appointments, CRM, sales managements and diverse marketplace.